“The bad guys, the criminals, don’t follow laws and restricting more of America’s freedoms when it comes to self-defense isn’t the answer.” – Sarah Palin

“…The challenge with gun laws is that by definition criminals do not follow the law. For example, Connecticut’s gun laws, some of the strictest in the nation, were not able to prevent this atrocity.” – Alex Conant, Marco Rubio’s spokesman

“Thus the classic slogan — when guns are outlawed, only outlaws will have guns — isn’t only a word play; it is a fundamental insight into the folly of gun prohibition. Such an approach means the bad guys are well-armed while law-abiding citizens are not.” – Jeffrey Miron 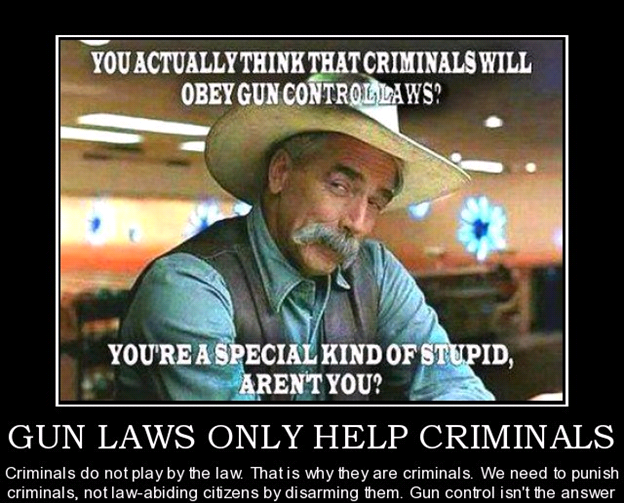 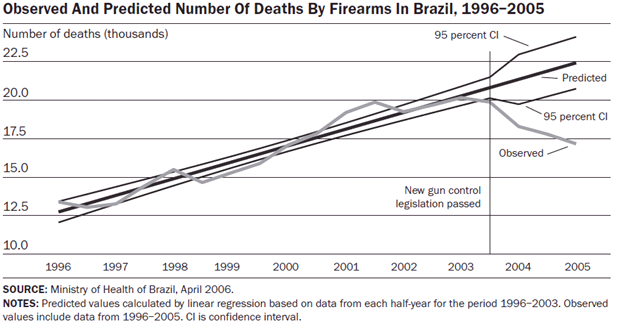 What do these two graphs have in common? They both show sharp decreases in the observed rates of firearm deaths immediately following the implementation of gun reform in two countries.  There is no way to reconcile this stark empirical reality with the argument that “criminals don’t obey laws.”  Clearly, some criminals obey some laws some of the time; this is the nature of incentive explicit in law enforcement. Even at the margins, this is valuable.    Indeed, J. Ludwig empirically validated this effect in his scholarly paper about gun control and violence: “even imperfect efforts to restrict gun availability to high-risk people can reduce illegal gun use on the margin, even if these regulatory barriers can be overcome in a number of ways by those who are determined to obtain a gun.”

We have one of two mechanisms to explain the decrease in violent crime following gun control: either potential criminals are deterred from crime, or existing criminals are deterred from crime. Either way, you have gun reform that has produced meaningful, substantive improvements in the metrics society should care about. If it’s not clear that laws have the capacity to induce changes in behavior, I won’t be able to improve upon that position.

The statement that “criminals do not follow laws” is true for the same reason it’s completely irrelevant to a substantive discussion on gun reform– it’s a tautology. It says exactly nothing about the proper course of action a society should take to improve social outcomes.

Definitionally, criminals don’t follow laws. This is no more a meaningful statement about social realities than the observation that dogs bark or cats meow, so it is baffling that gun proponents view this as an acceptable rejoinder in political debate.

Though it may seem like such an obvious point may not need mentioning, it has become increasingly popular among those who oppose gun reform to argue that such legislation only hurts law-abiding citizens, making it more difficult for innocent civilians to get the guns they need to defend themselves. Criminals, after all, don’t obey the laws that burden law-abiding citizens. I will term this position the lawbreaker paradox—a paradox because it axiomatically reinforces the idea that laws, though created with the intent to improve social outcomes, hurt the people who follow them.

The paradox is as follows:

Without exception, every law could be refuted with the lawbreaker’s paradox, and societies would swiftly descend into anarchy if it weren’t for reasonable policymakers. Laws against rape, murder, and theft, for example, are rarely followed by rapists, murderers, and thieves, but the fact that such people exist in society is the reason behind such regulations in the first place.

Among gun advocates forwarding this line of argument, there seems to be a serious lapse in moral intuition that privileges expediency over human lives. To think that the minor inconvenience of gun reforms such as background checks, waiting periods, and assault weapon bans is more burdensome than the death of thousands of innocent civilians each year (which such reforms seek to redress) reflects a miscalibrated sense of what matters in the world. After all, when gun advocates say that they are being ‘hurt’ by gun control, let’s be clear what the actual implication of this statement is: my right to not be bothered in the least by regulation outweighs the right to life for thousands of innocents who die in the absence of said regulation. Not only can such gun reforms reduce the number of homicides, but there is very little controversy about the tremendous effect they would have at reducing suicides. So, the belief that laws aimed at saving lives “hurt law-abiding citizens” is completely incompatible with any sane definition of right and wrong.

Why have any laws at all?

Not only is this conservative sound-bite irrelevant to gun reform discussion, it’s also socially untenable and dangerously naïve. If we were to accept that a law is justified only if it has a 100% compliance rate (this is, necessarily, the logical extension of any position that renounces legal reform under the pretense that ‘criminals don’t obey laws’), then we could systematically dismantle every existing law until nothing remains but the state of nature. Laws against murder, rape, and theft would be abandoned out of fear that criminals wouldn’t follow them, and that they would thus hurt law-abiding citizens who ostensibly murder, rape, and thieve out of self-defense. Taking this argument to its logical endpoint, even the most hardened of libertarians would be reticent to accept a world where property crimes can be used to abrogate property rights.

Not to mention that there are already plenty of weapons that have been banned which criminals aren’t using– RPGs, machine guns, anti-tank weapons, surface-to-air missiles, and so on. Just because something is illegal doesn’t mean that criminals automatically have a desire to use said weapons, or have access to a black market that could supply them.

Argumentum ad nauseam on why laws are good

I can think of at least three reasons why law and law enforcement is valuable:

A)     It allows people who have been wronged by criminals to seek retribution in the criminal justice system. A lack of coherent laws governing gun control would make all criminal justice disputations arbitrary.

B)      The punishment associated with breaking said laws forces criminals to internalize a cost to their actions. This cost will not deter the most hardened of criminals, but it will, unequivocally, deter a reasonable subset of potential criminals who resolve that the costs of jail time are not worth the benefit of their crime-to-be.

C)      The existence of laws influence social norms governing appropriate behavior.  Evidence from social psychology and evolutionary psychology, show that one’s evaluation of ‘right’ and ‘wrong’ are significantly determined by the views of authority figures (see Milgram Experiment and the Stanford Prison Experiment).  Not only can morality be legislated, but it seems easier to get humans to do immoral behavior given a government imprimatur. Research shows that private racist views intensify or diminish with respect to laws that epitomize those views. In the same sense, then, America’s gun laws contribute to a culture in which guns are valued as power symbols, totems of masculinity that prime aggressive, violent behavior. As Alec Wilkinson writes in The New Yorker, “It’s about having possession of a tool that makes a person feel powerful nearly to the point of exaltation… To people who support owning guns, the issue is treated as a right and a matter of democracy, not a complicated subject also involving elements of personal mental health. I am not saying that people who love guns inordinately are unstable; I am saying that a gun is the most powerful device there is to accessorize the ego.”

Building our better selves into law

But the entire argument misses the point, because the purpose of laws is to describe the most ideal set of rules and conditions that, when followed, produce socially optimal outcomes. Punishment in the form of fines, jail time, and social opprobrium functions as the enforcement mechanism behind these laws. So, it should be clear that the point of law has nothing to do with its adherence; that’s the point of law enforcement.

I’m reminded of a Sam Harris quote in the Moral Landscape:

“Clearly, one of the great tasks of civilization is to create cultural mechanisms that protect us from the moment-to-moment failures of our ethical intuitions. We must build our better selves into our laws, tax codes, and institutions…we must build a structure that reflects and enforces our deeper understanding of human well-being.”

Laws, therefore, are about ‘building our better selves’ into the social institutions that govern behavior. We endorse laws like gun reform because we ought to live in a society where people’s ethical intuitions and norms for communication are informed by diplomacy and compassion, rather than deterrence through mutually assured destruction.  We ought not live in a world where benign interactions are securitized through prejudice, stereotype, and threat construction because of constant fear that our concealed carrying neighbor has malignant intentions. We ought not live in a world where deliberation is transformed into Mexican standoffs, and our sense of security is inextricably bound up in how big our guns are and how fast they can shoot.