Why Campus Carry is a Bad Idea: Or Why Alcohol, Hormones, and Guns Don’t Mix 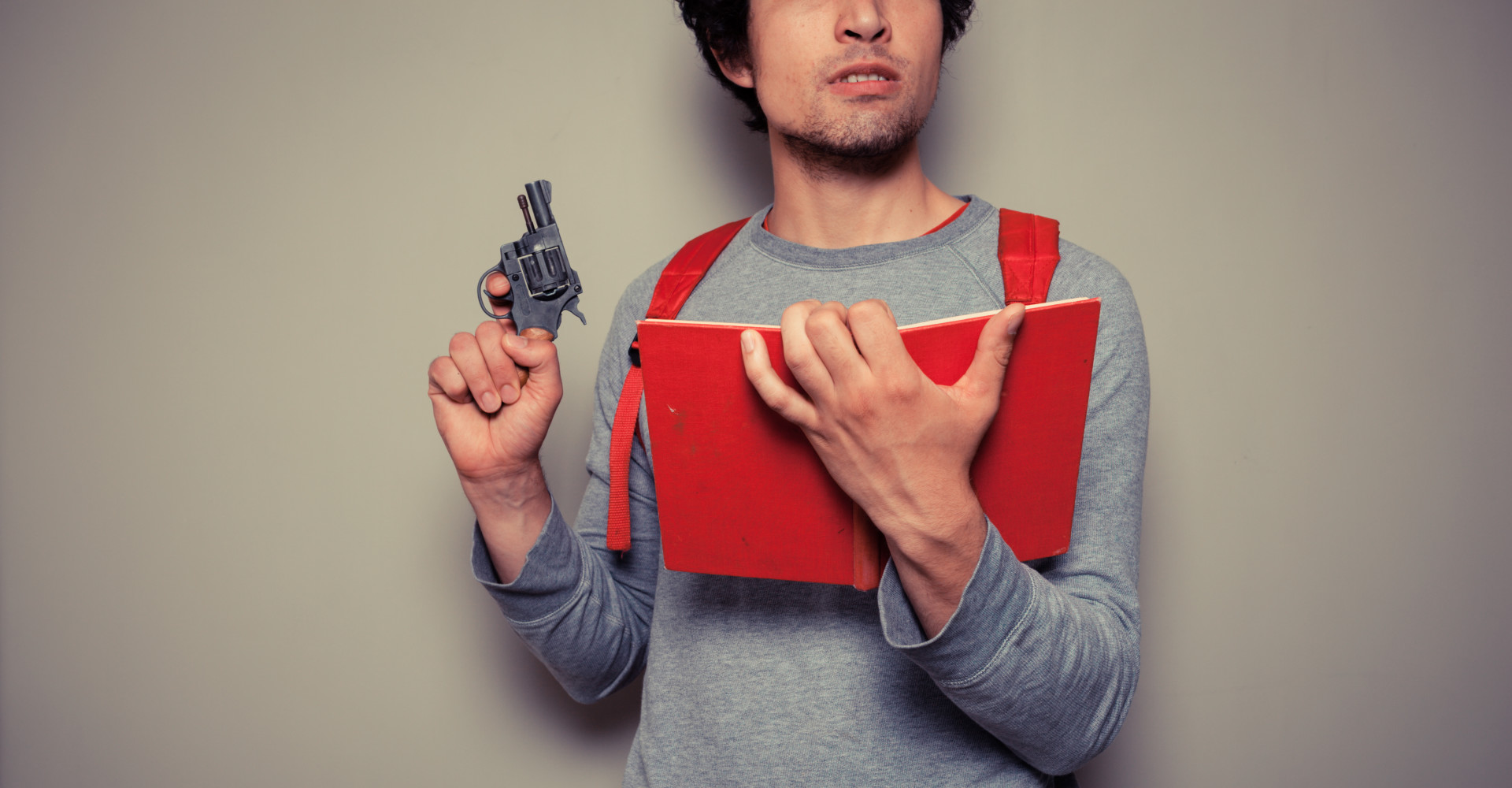 In the wake of last month’s shooting at an Oregon college, gun advocates have stepped up their calls for allowing firearms on campus. So-called campus-carry bills are on the legislative docket in Florida and Michigan, and lawmakers are expected to follow suit in Georgia, Tennessee, and Ohio, among other states. These measures come after Texas signed into law a campus-carry bill this spring that allowed firearms in school buildings and classrooms.

Campus-carry supporters lean on a few broader gun rights arguments to push their case for fewer restrictions on firearms. In Michigan, for instance, pro-gun researcher John Lott, testifying at a committee hearing on campus carry, repeated his thoroughly discredited argument that mass murderers target gun-free zones, including colleges and universities that ban firearms on campus. At a Florida hearing on campus carry, criminologist Gary Kleck continued to peddle his debunked claim that defensive gun use “is both frequent and effective” and that armed students would therefore be equipped to ward off criminals. A lawsuit challenging the University of Missouri’s ban on concealed carry falsely argues that concealed carry reduces crime and makes the misguided assertion that banning firearms on campus endangers law-abiding citizens because criminals don’t follow laws and will carry guns anyway.

But along with those familiar talking points, campus-carry advocates have increasingly focused on two arguments in particular: that more firearms on campus could not only stop massacres like the 2007 mass shooting at Virginia Tech, but also prevent sexual assaults. Just like their other claims, though, these two tenets are fatally flawed — and ignore the risks that come with allowing students and faculty to carry guns on school grounds.

The argument that campus carry would be an effective deterrent to sexual assault has been summarized memorably by Marion Hammer, a former president of the NRA, who stated that banning guns on campus provides “a sanctuary where criminals can rape and commit mass murder without fear of resistance.” She went on to claim that opponents of a campus carry bill in Florida were “engaging in a war against women.”

But the numbers tell a different story. A recent study by David Hemenway of Harvard examined data from the National Crime Victimization Survey (NCVS) and found that women almost never successfully fend off a would-be rapist with a firearm. Of the more than 300 cases of sexual assault in the NCVS data from 2007-11, not one was stopped by a firearm. A similar study examining NCVS data from 1992-2001 turned up only one case of defensive gun use out of 1,119 reported sexual assaults in the survey.

One examination of data from the Clery Act, which compiles information about crimes committed on or near college campuses, found that in Utah and Colorado crime rates actually increased in each state after campus carry was enacted. The study shows that, since carry legislation passed in Colorado, the rate of forcible rape increased by 25 percent in 2012 and 36 percent in 2013. In Utah, campus rape increased nearly 50 percent between 2012 and 2013. By contrast, sexual assaults nationwide have been decreasing each year by approximately 3 percent. To be sure, this data doesn’t prove that allowing guns at universities and colleges in Utah and Colorado caused those crime increases. But it does refute the idea that more good guys and gals with guns are deterring sexual criminals on campus.

The tactic of using rape victims to justify pushing for guns on campus has been strongly denounced by several organizations dedicated to helping sexual assault survivors. John Foubert, the president of One in Four, told the New York Times that campus-carry advocates’ argument “reflects a misunderstanding of sexual assaults in general… If you have a rape situation, usually it starts with some sort of consensual behavior, and by the time it switches to nonconsensual, it would be nearly impossible to run for a gun.”

What’s more, gun advocates overlook that allowing guns on campus would also potentially make it easier for the perpetrators of sexual assaults to be armed. “If my rapist had a gun at school,” a sexual assault survivor and activist for Know Your IX has said, “I have no doubt I would be dead.”

Gun advocates routinely argue that mass shooters are fixated on maximizing casualties, and thus target areas where they’re least likely to encounter armed resistance. By this logic, so-called gun-free zones are ripe targets for mayhem. GOP presidential candidate Donald Trump circuitously summarized this theory in the most recent Republican debate: “I feel that the gun-free zones… [are] target practice for the sickos and for the mentally ill.” The only way to stop this “feeding frenzy,” according to campus-carry advocates, is to make sure there are plenty of armed students and teachers to stop any bad guys with guns.

Yet the existing research shows that this faith in good guys with guns is misplaced. An FBI report detailing 160 active shooting incidents from 2000-2013 found that only one incident was stopped by a concealed carry permit holder, and he happened to be a Marine. (Four others were stopped by armed guards, and two more by off-duty police officers.) By comparison, 21 active shooters were stopped by unarmed citizens — good guys without guns. In several cases, a good guy with a gun has attempted to intervene and either been killed, injured, or nearly shot the wrong person.

Gun advocates might argue that the reason so few concealed carriers have intervened in active shootings comes down to bad luck: They just haven’t been in the right place at the right time; had they been, then surely more mass shootings would have been prevented. This line of argument is refuted by multiple controlled experiments designed to test how good guys with guns fare in dangerous situations. One of these analyses came from anindependent study commissioned by the National Gun Victims Action Council (NGVAC). The study analyzed 77 participants of varying skill levels who went through three different self-defense scenarios. The results were harrowing. In the first scenario, 7 of the 77 participants shot an innocent bystander, and overall, in scenarios one and two, most of the participants, regardless of skill level, were killed. In the third scenario, where the suspect was not a threat, 23 percent of the participants fired anyway. As the NGVAC points out, none of the participants came close to the accuracy or judgement required to stop an active shooter or a criminal.

Their dismal performance doesn’t come as a surprise to security and tactical experts, who in a recent article in The Nation warned that during an active shooting, an armed civilian without extensive training posed a greater security risk than a benefit. As David Chipman, a former ATF agent and member of a SWAT team, explained: “Training for a potentially deadly encounter meant, at a minimum, qualifying four times a year throughout my 25-year career. And this wasn’t just shooting paper — it meant doing extensive tactical exercises. And when I was on the SWAT team we had to undergo monthly tactical training.” This is a far cry from the four hours of classwork and paper target shooting practice required to get a concealed carry license in Florida and Texas, for instance. “The notion,“ Chipman said, “that you have a seal of approval just because you’re not a criminal — that you walk into a gun store and you’re ready for game-day — is ridiculous.”

Campus-carry proponents frequently downplay the risk of accidental shootings, pointing out their scarcity at colleges that already allow firearms and arguing that proper training can mitigate any dangers. But several accidents have occurred over the past several years at schools with campus carry — and they are accidents that almost certainly would not have occurred had concealed carry not been permitted on school grounds:

Even among highly trained professionals, gun accidents occur with startling frequency. For instance, in the US military, from 2003-11, more than 90 soldiers died from negligent discharges. And this number doesn’t include an unknown number of injuries from such accidents. One academic studyexamined the British Armed Forces from 2003-07, and found 1,158 unintentional firearm discharges, of which 43 resulted in injury. This translated to an unintentional injury rate of 7.7 per 100,000 regular army soldiers per year. If accidental shootings happen that often among trained professionals whose job requires frequent handling of firearms, the average student or professor carrying a firearm would unlikely fare better.

It is not just accidents that are exacerbated in the presence of firearms: guns can also escalate otherwise quickly forgotten disagreements into fatal encounters. That potential exists everywhere, and college property is no exception, as these incidents show.

Further compounding the risk of arguments turning deadly are findings indicating that the college students most likely to carry firearms in public may be predisposed to detrimental behavior. A 2002 study by David Hemenway found that having a gun at college was associated with engaging in more risky and aggressive behavior, as well as drinking heavily, which itself is a major risk factor in firearm violence. And a more recent study in 2015 determined that a significant number of firearm owners, and those who carry firearms in public, exhibit impulsive, angry behavior. This suggests that the young people who may be most apt to exercise a new permission to carry a firearm on their college campuses are a population that security experts might not be eager to see toting guns in their backpacks.

Harvard Study Embraced by Gun Rights Advocates Is Neither a “Study,” Nor From “Harvard”
2 Comments
A Thanksgiving-Edition Cliff Notes Guide to the Gun Debate