The Myth of The Mentally Ill Shooter: Why the NRA Blames Mental Illness And Ignores Alcohol Abuse 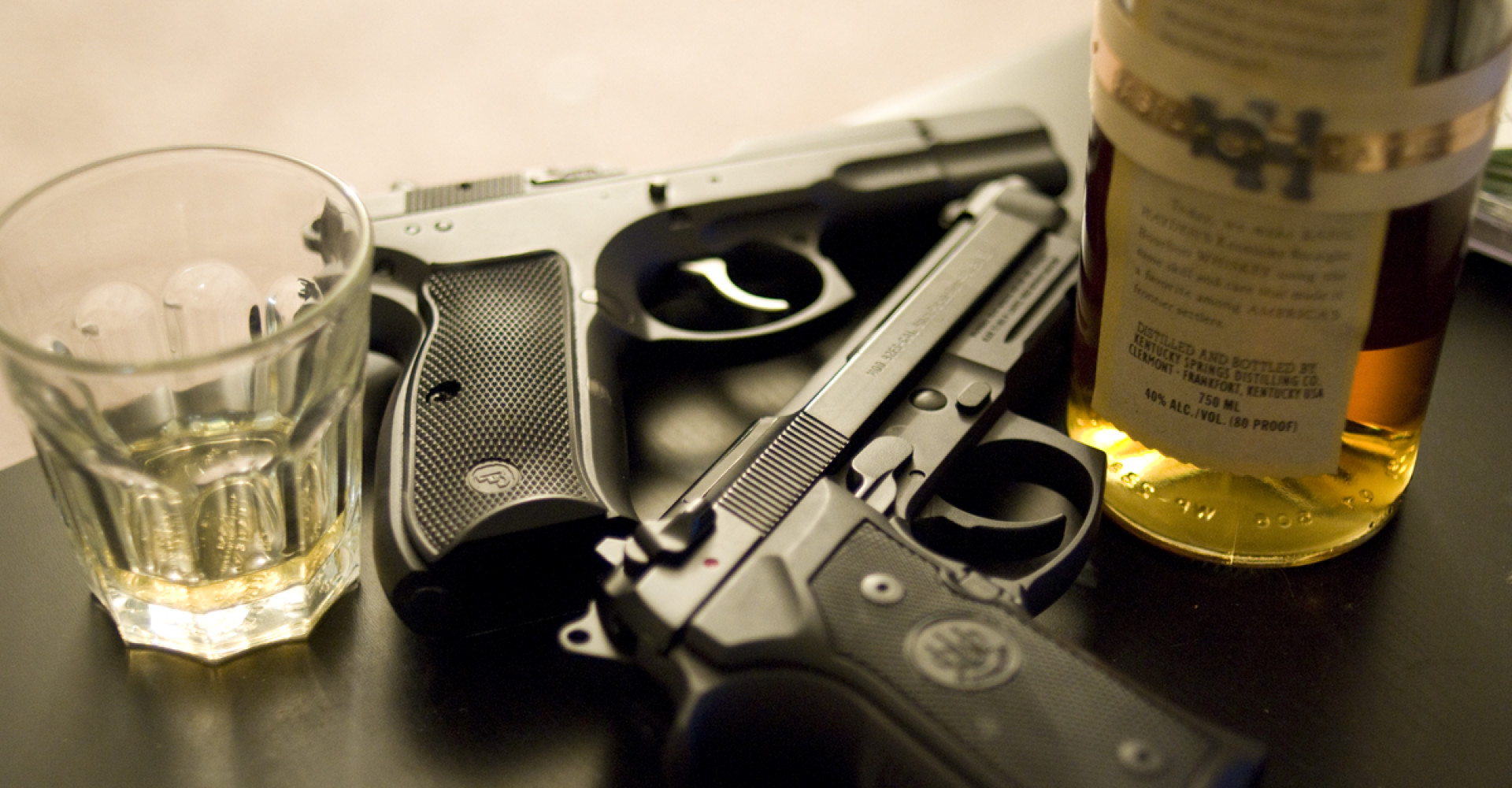 In the wake of the mass shooting in Chattanooga, Tennessee, investigators and the media have pored over the gunman’s personal life, trying to find an explanation for what might have caused the tragedy. As the FBI continues to look into the shooter’s potential terror ties, reports have already begun to reveal a troubling history of depression, drug use, and alcohol abuse — factors that are often implicated in mass shootings.

Despite accounting for a small fraction of America’s overall gun homicides, mass shootings are often used as a proxy to better understand gun violence in general. The seeming ubiquity of mental illness and substance abuse as causal factors in these headline-grabbing incidents often leads to overarching conclusions about people who commit violent acts with firearms — particularly by pro-gun advocates who regularly blame mass shootings on mental illness. But academic research suggests that the link associating mental illness with shootings is less clear than gun advocates claim. And the correlation between drug use and violent crime, it turns out, is unclear. What a closer look at the data does reveal is this: Outside of the availability of firearms, the chief factor influencing gun violence is alcohol abuse.

The mentally ill are statistically more a danger to themselves than to others.

Mass shootings in the United States are often politicized by interest groups seeking to blame a particular segment of society for gun violence — video games and films, for instance, are regularly cited as culprits. For the National Rifle Association, the most common scapegoat for mass shootings is mental illness. Anecdotal evidence appears to substantiate this claim — after all, the gunmen responsible for the Aurora, Newtown, and Washington Navy Yard shootings all suffered from some form of mental illness.

Wayne LaPierre, the executive vice president of the NRA, regularly champions the idea of a national database to identify individuals who suffer from severe mental illness. In a press conference after the Newtown massacre, LaPierre wondered how many more “deranged” individuals would “try to make their mark” with similar acts of gun violence, while lambasting the government’s refusal to adequately track the mentally ill. For pro-gun advocates, easy access to firearms is not a relevant factor in mass shootings; the real problem is mental illness.

Yet there is remarkably little evidence to support the link between mental illness and violent crime. As a review of medical literature published earlier this year explains, 96 percent of violent acts are committed by people without a mental illness. Rather than being a threat to others, individuals with mental illness are far more often a threat to themselves. Roughly 15 percent of schizophrenics and people with major depression commit suicide in the U.S.; this is in contrast to an overall suicide rate of 13 per 100,000 (or .013 percent). What’s more, an international meta-analysis of seven studies found that, in several advanced nations outside the U.S., the annual rate of stranger homicide (when the perpetrator doesn’t know the victim beforehand) committed by people with psychotic illnesses was just 1 per 14.3 million. By comparison, the firearm homicide rate in the U.S. is around 3.5 per 100,000.

A 2009 study of more than 34,000 participants in the National Epidemiologic Survey on Alcohol and Related Conditions further belies the link between mental illness and violence. It found that schizophrenia, bipolar disorder, and major depression fail to predict future violence — unless mental illness is paired with substance abuse.

In addition to pointing to mental illness as a chief cause of violent crime, some gun proponents tout the idea that prescription medications play a role in these attacks. (This belief is apparently rooted in the “Black Box” labels that are found on the packages of certain prescription drugs, which warn of side effects like an increased risk of suicidal behavior.) GOP presidential contender Rick Perry, for instance, suggested after the Charleston shooting that the gunman was taking psychiatric medication. “It seems to me — again, without having all the details about this one — that these individuals have been medicated,” Perry told a NewsmaxTV reporter, referring to the Charleston shooter. “And there may be a real issue in this country, from the standpoint of these drugs, and how they’re used.”

But again, there’s no substantive academic evidence linking prescription medications to gun violence in general. In fact, most research indicates the exact opposite: Prescription medications, when used to treat mental illness, actually reduce rates of violence. A 2010 meta-analysis of 10 studies found that drug treatments for psychosis lowered the rate of homicides committed by schizophrenics from 1.59 homicides per 1,000 to .11 per 1,000 — a 93 percent drop. A different meta-analysis examining antidepressants found that they significantly reduced suicidal behavior and ideation. There was no evidence that these drugs increased violent behavior.

The substance most often associated with violent crime is alcohol.

To understand the link between substance abuse and gun violence, it is important to distinguish between illicit drugs and alcohol. A major finding from a 1998 review of scientific literature revealed that “despite a number of published statements to the contrary, we find no significant evidence suggesting that drug use is associated with violence.” That same paper revealed that the substance most associated with violent crime isn’t a street drug like PCP or heroin. Rather, it’s alcohol. A 2013 meta-analysis of 23 studies concluded that “48 percent of homicide offenders were reportedly under the influence of alcohol at the time of the offense and 37 percent were intoxicated.”

Several studies have established the relationship between alcohol abuse and firearm-related crimes. Just as an individual is severely handicapped while operating a car under the influence, these studies found that similar failures in judgment and impulse control manifest during the operation of a firearm. Research shows that the risk of homicide, suicide, and violent death by all causes is significantly elevated with chronic alcohol abuse. Another studyfound a causal relationship between alcohol abuse and “impulsive” crimes such as assault and property damage.

Garen Wintemute, a professor of emergency medicine who runs the Violence Prevention Research Program at the University of California, Davis, has conducted two recent studies on alcohol use among gun owners and how it might impact their behavior. In 2011, using data from the Behavioral Risk Factor Surveillance System — an annual survey of risk-related behaviors conducted by the Centers of Disease Control — for eight states and more than 15,000 respondents, he found that gun owners are significantly more likely than non-firearm owners to have five or more drinks on one occasion, to drink and drive, and have 60 or more drinks per month.

Additionally, in 2015, Wintemute discovered that firearm owners who drink excessively had a history of risky behavior, including higher rates of non-traffic offenses, an overall higher risk of arrest, and greater reported “trouble with the police.” Alcohol abuse, the 2011 study found, also leads to risky behavior with guns: For instance, alcohol intoxication is likely to impair a firearm owner’s “decision-to-shoot” judgment. And while Wintemute didn’t seek a direct link between alcohol abuse and gun violence, he did conclude that of the nearly 400,000 firearm-related deaths between 1997 and 2009, “it is probable that more than a third of these deaths involved alcohol.”

These findings have profound implications for crafting policy to avert future tragedies. In the wake of mass shootings, politicians from both sides of the aisle often call for including better mental health records in background checks. Though a worthwhile sentiment, the evidence suggests that these efforts would be better spent focusing on alcohol abuse instead.