Constitutional Fallacies Part II: The Myth of an Unlimited Right 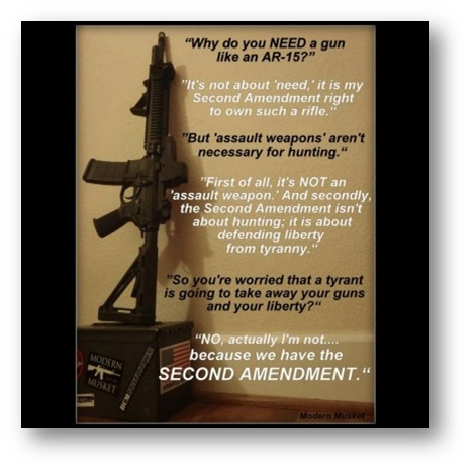 Gun Control is not about guns; it’s about control. – Popular slogan

No free man shall ever be debarred the use of arms. The strongest reason for the people to retain the right to keep and bear arms is, as a last resort, to protect themselves against tyranny in government.     – Thomas Jefferson, Proposed Virginia Constitution, 1776, Jefferson Papers 344

When they come for your guns, give them the ammo first. – Boston T. Party 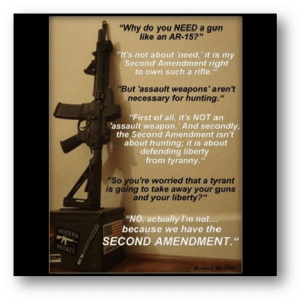 The preamble of a statute is a key to open the mind of the makers, as to the mischiefs, which are to be remedied, and the objects, which are to be accomplished by the provisions of the statute. – Joseph Story, former Supreme Court Justice

The Second Amendment is not an absolute guarantee to own any firearm, and until recently was not considered an individual right.

For most of America’s history, the Second Amendment was interpreted as only applying to militia service, unlike in many state constitutions where the individual right to bear arms is clearly spelled out. Even though there is some scattered evidence supporting the view that the Second Amendment is an individual right, for most of the 20th century (when gun-control entered the national discussion), the consensus view was that it protected a collective right, nothing more. As the Supreme Court ruled in United States v. Miller, a case challenging the first major federal gun control law, the right of the people to keep and bear arms is an individual right only in that it requires individuals to man a militia. It was not until very recently that the right was detached from such service and declared a purely individual right.

The debates during Virginia’s ratification of the Constitution are especially illuminating. The Federalists argue that the power of the Federal Government over Militias was necessary for the defense of the nation, and was not exclusive to the Federal Government (i.e. states still have some say in the matter). Anti-Federalists rejoined that this was too much centralized authority and the Federal Government could abuse this power to the detriment of the states. For example, as Carl Bogus explains in “The Hidden History of the Second Amendment,” during a slave rebellion, the Congress could conceivably call the Militia to deal with a “threat” somewhere in the North, thereby leaving Southern States helpless. Conspicuously lacking from this debate was any discussion about an individual right to bear arms. The entire debate centered around which government was really in charge of the Militia, State or Federal, not whether citizens could carry arms outside militia service.

Moving ahead a couple centuries, during the 1934 debate over Federal gun laws, Karl T. Frederick, president of the NRA and “the best shot in America,” stated he did “not believe in the general promiscuous toting of guns. I think it should be sharply restricted and only under licenses.” When questioned on whether the proposed gun laws ran afoul of the constitution, Frederick responded “I have not given it any study from that point of view.” Today, it would be unthinkable for the head of the NRA not to use a constitutional argument in defense of gun ownership. Frederick would further elaborate in other writings that the right of law-abiding citizens to carry guns “lies in an enlightened public sentiment and in intelligent legislative action. It is not to be found in the Constitution.”

The gun lobby’s modern interpretation of the second amendment as all rights and no regulation began, ironically, with the Black Panthers during the 1960s. The Black Panthers, inspired by Malcom X, began openly carrying loaded weapons as a means of self-defense (and intimidation). This movement climaxed when a group of Panthers entered the California State Capitol, armed with an assortment of loaded weapons. Ronald Reagan, then governor of California, responded to the Panther’s adoption of gun rights as a “ridiculous way to solve problems that have to be solved among people of good will” and that he saw “no reason why on the street today a citizen should be carrying loaded weapons.”

However, let us make the most pro-gun assumption possible and assert that the Second Amendment unquestionably protects an individual right to bear arms. It changes nothing in the discussion of gun control. Even as an individual right, the government still has the Constitutional authority to regulate firearms, as expressed in the Second Amendment. The two most recent Supreme Court rulings on the Second Amendment, District of Colombia v. Heller and McDonald v. Chicago, stated that an absolute ban on all firearms was unconstitutional, the right to own a weapon did not depend on militia service, and that the ruling was enforceable against the States. But both protected gun regulation. From the majority opinion of DC v. Heller:

Like most rights, the Second Amendment right is not unlimited. It is not a right to keep and carry any weapon whatsoever in any manner whatsoever and for whatever purpose: For example, concealed weapons prohibitions have been upheld under the Amendment or state analogues. The Court’s opinion should not be taken to cast doubt on longstanding prohibitions on the possession of firearms by felons and the mentally ill, or laws forbidding the carrying of firearms in sensitive places such as schools and government buildings, or laws imposing conditions and qualifications on the commercial sale of arms. Miller’s holding that the sorts of weapons protected are those “in common use at the time” finds support in the historical tradition of prohibiting the carrying of dangerous and unusual weapons.

The dissenting opinion provides even less support for the unlimited right interpretation:

Until the Fifth Circuit’s decision in United States v. Emerson, 270 F. 3d 203 (2001), every Court of Appeals to consider the question had understood Miller to hold that the Second Amendment does not protect the right to possess and use guns for purely private, civilian purposes.

Even with the court’s massive break from precedence, the majority opinion still holds that the Second Amendment right to keep and bear arms is not unlimited. Not one of the justices sees the Second Amendment as guaranteeing a right to own any firearm, and certainly not without restrictions. Indeed, as Adam Winkler, a constitutional law professor at UCLA, notes, in the nearly 200 rulings on the constitutionality of gun control by lower courts since DC v. Heller, almost all of them supported the current gun laws.

Let’s start with the “unfair comparison” argument. While is certainly would be unfair to compare most handguns and small-game hunting rifles to these weapons, assault weapons are in the same league as machine guns. In most situations automatic fire is less effective than semi-automatic, and large machine guns are impractical to carry by hand. As we explained in The Hammer Theory of Guns, the only difference between military assault rifles and the civilian versions is the ability to go automatic, which does little to change the killing capacity of the weapons. A .50 caliber rifle (which is legal) is designed to blast through walls and stop vehicles. A gun advocate may point out that very few people are killed with assault rifles and .50 caliber rifles, which is true. However, very few people in the US are killed with machine guns or RPGs as well. Would that be a legitimate argument for legalizing them? Hardly.

The second response parallels the arguments of those favoring further gun control and assault weapons bans. Assault weapons simply aren’t necessary for self-defense or recreation, and some crazy dudes do use them to catastrophic effect.

Part 3 will debunk the myth that Militias (even in the Constitutional sense) are effective at preventing tyranny. Part 4 will tackle the broader philosophical debate of the freedom to bear arms.