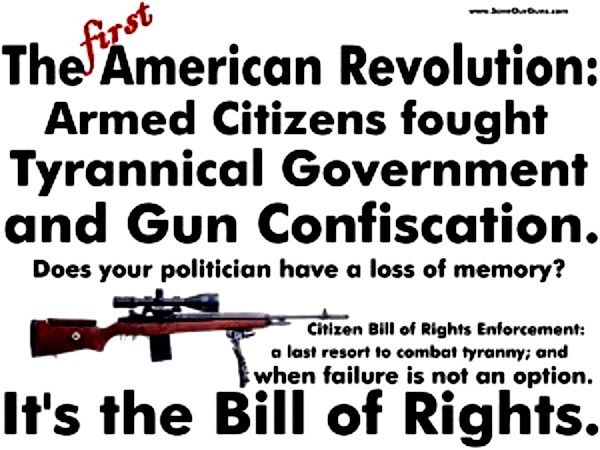 To put it bluntly, I need an assault rifle in the event that I might have to declare my independence from a tyrannical government. I’m statistically unlikely to ever shoot an intruder in my home. I’m statistically unlikely to ever be in the position to stop one of these rare mass killings at a school, as these things happen far less often than the media would have you believe. However, whether you are Democrat or Republican, you can easily find countless instances of the government stepping all over your rights, whether it be on social issues (marriage, gay rights, religious rights, etc.) or fiscal issues (taxation, property rights, business regulations, etc.) – http://www.dailypaul.com/266890/why-do-i-need-an-assault-rifle

The Second Amendment is a doomsday provision, one designed for those exceptionally rare circumstances where all other rights have failed — where the government refuses to stand for re-election and silences those who protest; where courts have lost the courage to oppose, or can find no one to enforce their decrees. However improbable these contingencies may seem today, facing them unprepared is a mistake free people get to make only once. – Judge Alex Kozinski

The strongest reason for the people to retain the right to keep and bear arms is, as a last resort, to protect themselves against tyranny in government. – Wrongly attributed to Thomas Jefferson 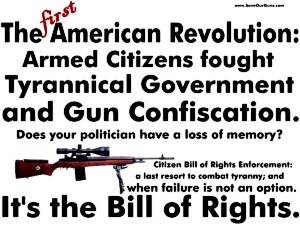 There is little to no evidence that the founding fathers intended the Second Amendment as a “doomsday proposition.” In fact, the language of the constitution directly refutes such an interpretation. Let’s start by looking at the text of the Second Amendment itself. I’ll skip over the “well regulated” part for now as any argument for constitutional insurrection necessarily overlooks this phrase (kind of hard to stage an insurrection when you are being “well regulated” by the government you are trying to overthrow). I would like to examine the “being necessary for the security of a free State” portion.  Notice that the text does not read “being necessary to overthrow the State” or “being necessary in case some dude feels the State has become tyrannical.” The purpose of a Militia and the reason “the right of the people to keep and bear Arms, shall not be infringed” is to protect the state. Period. As Dennis A. Henigan notes in Arms, Anarchy and the Second Amendment, “How, then, can the Amendment that purports to express distrust of state governmental power, and to create a right to be armed against abuses of that power, also elevate the defense of state government to a constitutionally protected value?” The answer of course is that the insurrectionist interpretation of the Second Amendment is logically impossible.

An “insurrectionist” (an extremely vocal minority of gun advocates) may rejoin that I left out the adjective “free.” We will only overthrow the State when it becomes tyrannical and reinstall a “free State,” thus following the Second Amendment. However, this line of thought falls prey to fact that freedom and tyranny are on a continuum. There is no specific marker on a tyranny scale of “government mandated seatbelts” to “Hitler” of when government becomes “tyrannical” and needs to be overthrown. To make matters even worse, even if there was an objective scale for tyranny, it would be different for each person. While most people would readily agree that Hitler = tyranny, any sane person would also recognize that government mandated seatbelts (which make everybody safer) is not worth violently overthrowing the government and reestablishing a “free State.” However, what constitutes a revolution-worthy amount of tyranny? One person’s “no big deal” is another person’s “slippery slope to Hitler,” and if each citizen gets to decide at what perceived level of tyranny the government should be overthrown, anarchy results. If this theory of the Second Amendment (and the Constitution in general) had any legal validity, we would be in a state of perpetual revolution, which is no State at all. As Chief Justice John Roberts states, “Allegorical depictions of the law frequently show a figure wielding a sword—the sword of justice, to be used to smite those who violate the criminal laws … A basic step in organizing a civilized society is to take that sword out of private hands and turn it over to an organized government, acting on behalf of all the people. Indeed, ‘The . . . power a man has in the state of nature is the power to punish the crimes committed against that law. [But this] he gives up when he joins [a] … political society, and incorporates into [a] commonwealth.’ (John Locke)” (italics added)

Next, let’s examine the rest of the constitution to provide clues about the purpose of the Militia:

“The Congress shall have Power…

To provide for calling forth the Militia to execute the Laws of the Union, suppress Insurrections and repel Invasions;

To provide for organizing, arming, and disciplining, the Militia, and for governing such Part of them as may be employed in the Service of the United States, reserving to the States respectively, the Appointment of the Officers, and the Authority of training the Militia according to the discipline prescribed by Congress.” – Article I, Section 8

There is no language in the Constitution advocating armed insurrection. In fact, the Constitution lays out the polar opposite case. The Militia is supposed to suppress insurrections against the state, not start them. Also obvious is that the term “Militia” does not refer to an unorganized mob but rather a trained force ready to repulse any military threat to the State. During this time period the US did not have a standing military, meaning the militia was the first, last, and only line of defense against armed threats. Just as the military and National Guard (the modern version of the Militia) are the guarantors of State security today, so too was the Militia during the early days of the Republic.

Finally, let’s take a look at how the Constitution interprets insurrection (which, by definition, involves levying war against the government):

Treason against the United States, shall consist only in levying War against them, or in adhering to their Enemies, giving them Aid and Comfort. – Article III, Section 3

If the explicit language of the Constitution is not convincing enough, a brief historical examination of the early years after the Revolution should remove any final doubts. In the chaotic years following our country’s independence there were two major rebellions:

Shay’s Rebellion (1786) – Government had become “tyrannical” because courts permitted creditors to collect debts by seizing the property of debtors. The crackdown on debts and an increase in taxes created a large amount of discontent among already struggling farmers. These farmers, armed with muskets, threatened the state government, prevented the seizure of property, and blocked the collection of taxes. Property after all is a fundamental freedom, and seizing that property was a sure sign of tyranny.

Whiskey Rebellion (1794) – Farmers in Pennsylvania and Kentucky threatened tax collectors with gun violence when they attempted to collect on the newly implemented whiskey tax. These farmers formed a militia and marched under the banner of “Liberty and Equality.” In response, George Washington indicated “that the very existence of government and the fundamental principles of social order are materially involved in the issue, and that the patriotism and firmness of all good citizens are seriously called upon, as occasions may require, to aid in the effectual suppression of so fatal a spirit.”

It is worth noting that in neither of these cases did the founding fathers find the arguments for insurrection persuasive. Madison called the Shay’s Rebellion “treason“, and it was immediately condemned by George Washington and the other Founding Fathers. The Founding Fathers (with the exception of Thomas Jefferson) saw Shay’s Rebellion as a prelude to anarchy and swiftly set out to strengthen and eventually replace the Articles of Confederation with the Constitution, in large part to combat future insurrections. In response to the Whiskey Rebellion, George Washington put these federal powers to use (including the Militia Acts of 1792) and suppressed the rebellion with a militia force of nearly 13,000 men.

This early history of our country also reveals what the founding fathers intended as a “Militia.” In 1792 Congress passed the Militia Acts, which conscripted every able bodied male (with a few exceptions) between the ages of 18 and 45, and mandated these conscripts supply most of their own equipment, including a rifle (yes, the Founding Fathers supported and enacted an individual mandate). They were required to report to musters, where their weapons were registered on public rolls (yes, the Founding Fathers supported and enacted a national gun registry). While the Founding Fathers saw these measures as necessary for the security of a free nation, insurrectionists today would probably decry these policies as unconstitutional and a step down the road to serfdom, just as they irrationally denounce all attempts at common sense gun reform as an assault on fundamental liberties.

Even if we accept the inherently absurd proposition that the intention of the Second Amendment is to promote armed insurrection as a “doomsday provision” or the ultimate check on government power (along with ignoring the early history of the US), the weapons that are currently legal would do little to stop a government bent on usurping our constitutional rights. Even fully automatic weapons would do little to stop a determined military response.  Unregulated, undisciplined mobs, that insurrectionists feel the Constitution refers to as Militias and are the vanguard against tyranny have a history in the United States. One only has to look at the examples of the Ku Klux Klan, Neo-Nazi elements, the Black Panthers, and other armed groups to see that these supposed militias only create more tyranny and fear, not liberty. Armed intimidation, which is what insurrectionists contend is necessary to stop tyranny, is a form of tyranny in and of itself.

I would like to end with a couple of quotes:

Happy for us, that when we find our constitutions defective and insufficient to secure the happiness of our people, we can assemble with all the coolness of philosophers and set it to rights, while every other nation on earth must have recourse to arms to amend or to restore their constitutions. – Thomas Jefferson

It is safe to assert that no government proper ever had a provision in its organic law for its own termination. – Abraham Lincoln