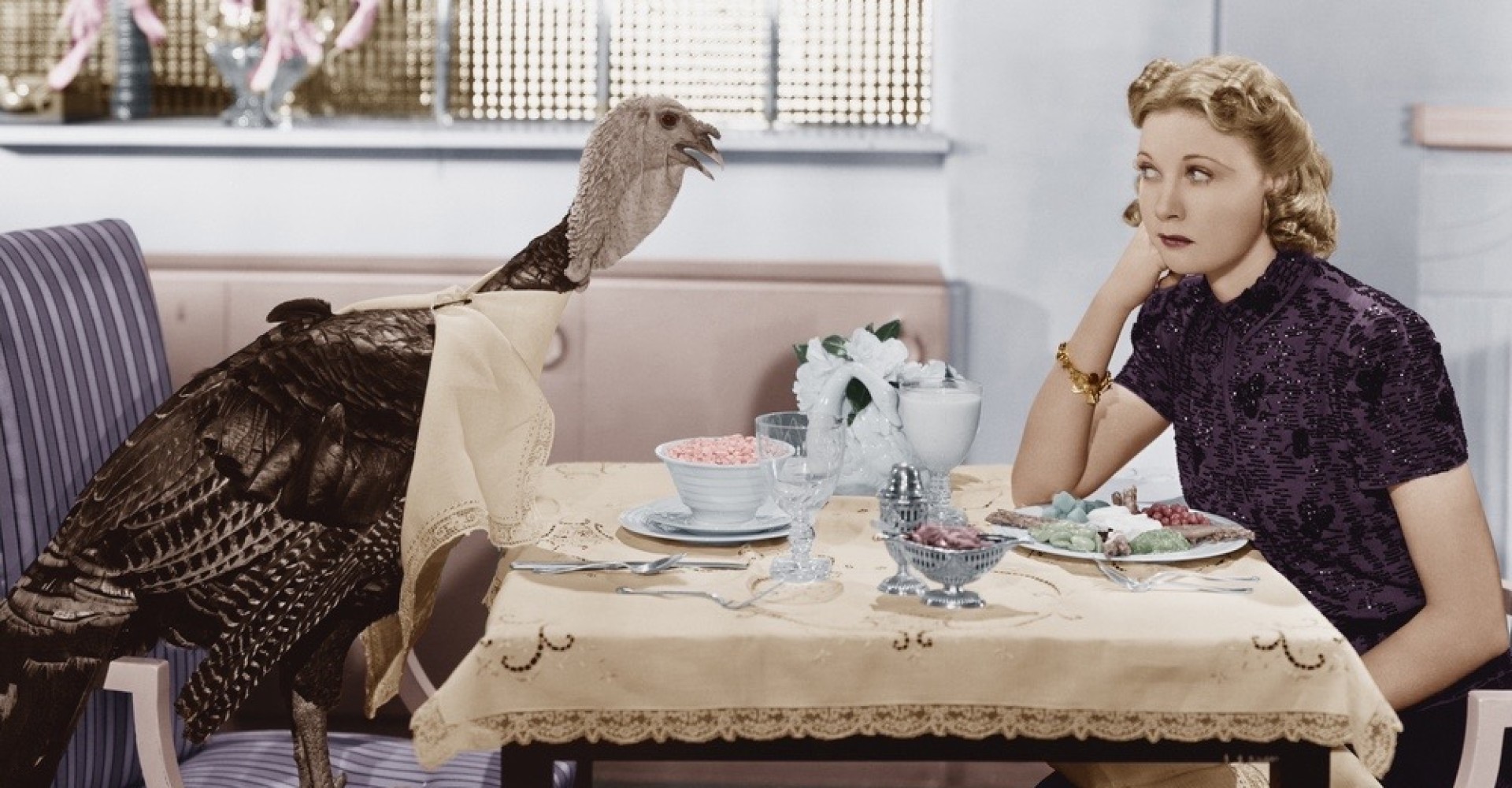 Thanksgiving is a time to eat, drink, and, inevitably, fall into heartburn-inducing arguments with family members over politically charged topics. When the topic on the table (as it were) is gun violence or gun laws, things can get heated fast, as even the most reasonable debate about firearms rights and regulations is likely to be driven by widely divergent beliefs.

If you’re going to fight over guns this holiday season, then you’re going to want to come prepared with some hard facts. The following guide assumes that your position on the issue is that rates of gun deaths and injuries are too high, and that gun laws are generally too loose. When your pro-gun aunt or uncle uncorks (such as it is) a familiar talking point, here’s your empirically supported response.

The argument: “Gun-free zones are target practice for sickos.”

The Reality: This is the Donald Trump version of a popular talking point, which posits that mass shooters are hyper-rational calculating machines bent on maximizing casualties and avoiding resistance at all costs. But FBI data points to a simpler truth: Shooters overwhelmingly target areas to which they have some personal connection. In 63 percent of active shootings between 2000-2013, in commercial or educational settings, the shooter had some relationship to the area, according to a study undertaken by the bureau. And if mass shooters were singling out gun-free zones, the evidence shows they’re not very good at it. Everytown for Gun Safety found that, between January 2009 and July 2014, 16 mass shootings took place where civilians were allowed to carry firearms, and two others had armed guards or police at the scene. In our own analysis of 65 active shootings between 2000 and 2013 in public spaces or commercial areas open to pedestrians, we found that 25 of those areas allowed firearms.

The reality: Though some mass shootings have been committed by individuals with some form of mental illness, this line of reasoning conflates those high profile events with everyday gun violence, which is orders of magnitude more common — and highly unlikely to be committed by persons suffering from psychiatric conditions. Less than 4 percent of all types of violent acts are committed by people with a mental illness, who are more a threat to themselves than to others. Outside of gun availability, alcohol abuse has a much stronger relationship with gun violence than mental health does. Indeed, studies find that severe mental illness alone is “statistically unrelated” to violence.

The reality: This trifecta of pro-gun rhetoric requires a point-by-point debunking. First, it is true that there’s no conclusive proof that the background check system introduced by the 1993 Brady Act has significantly reduced gun violence. But experts caution against drawing any conclusions from this fact: “Some may argue that the regulation of gun acquisitions is futile. A more likely explanation for why the Brady Act did not do more to reduce gun homicide is that the act exempts the 30 percent to 40 percent of all gun sales each year that do not involve a licensed dealer.”

What’s more, licensing laws centered on background checks — such as permit-to-purchase policies in Missouri and Connecticut — have been shown to reduce both homicides and suicides in multiple studies. Separate studies have demonstrated that denying some groups of criminals access to legal firearms via background check denials reduces later illegal activity by up to 30 percent.

So the problem isn’t that background checks don’t thwart bad guys — in fact, they’ve stopped 2.4 million gun purchases by prohibited persons so far. It’s that loopholes in the system make it easy for criminals to acquire firearms through unregulated transactions.

As for the inconvenience angle: 91 percent of background checks take less than two minutes to complete, according to the FBI. And incidentally, 83 percent of gun owners (and 72 percent of NRA members) support extending them to all gun sales.

The argument: “If tougher gun laws stop gun violence, how do you explain Chicago?”

The reality: Chicago is proof that living next to bad neighbors can lead to bad outcomes. Illinois is bordered by Indiana, Missouri, and Kentucky, all of which have weaker gun laws and routinely traffic large number of guns into Chicago. Even so, research shows that Chicago’s strict gun laws decrease gun violence by increasing the costs of guns and ammunition, making it harder for criminals to access guns through the black market. And if you look at New Orleans and St. Louis, two major cities with the country’s highest homicide rates — rates well above Chicago’s — each of them is located in a state with relatively weak gun laws. According to the Law Center to Prevent Gun Violence, Louisiana has the nation’s weakest gun laws, while Missouri has the sixth weakest. Illinois’s gun laws, by contrast, rank as the eighth strictest in the nation.

The argument: “If you ban guns, people with just find another way to kill each other or themselves.”

The reality: Lawnmowers don’t mow lawns, people mow lawns. But if you want to efficiently and quickly mow a lot of grass, you are going to need a lawnmower. In other words, the tool matters. Firearms make it easy to kill people, efficiently, effectively, and at a distance. Even were people to attemptto kill others and themselves at the same rates if guns didn’t exist, the death rate would still fall precipitously because people would be forced to rely on less lethal means such as knives. This is especially true regarding suicides.

The argument: “Guns make us safer: Gun owners defend themselves against criminals all the time.”

The reality: Widespread defensive gun use is a myth. The NRA claims that guns are used in self-defense “millions of times a year,” but the group’s sources for this claim – surveys conducted by criminologist Gary Kleck — suffer from a severe false positive problem and suggest crime prevention numbers that are mathematically impossible. The best empirical evidence to date from the Gun Violence Archive could only find 1,600 verified defensive gun uses (DGUs) in 2014. This means that 99.936 percent of Kleck’s claimed 2.5 million DGUs are nowhere to be found, despite Kleck’s assertion that more than 50 percent of DGUs are reported to the police (meaning there should be a record of them). Even with very generous assumptions, it is not possible for DGUs to be as prevalent as the NRA and other gun organizations claim.

The reality: It isn’t true that the only way to stop an attacker with a gun is to have a gun yourself. Here again the source is the FBI’s report on active shootings, which shows that out of 160 incidents from 2000-2013, 21 were stopped by unarmed individuals. By comparison, only one incident was stopped by a civilian with a concealed handgun (four others were stopped by security guards, and two by off-duty police). Separately, a study this yearanalyzing data from the National Crime Victimization Survey (NCVS) found that using a gun in self-defense was no more effective at preventing an injury than doing nothing at all, and less effective than running away or calling the police.

The argument: “More guns mean less crime. States with the fewest guns have the most crime.”

The reality: The research suggesting more guns equals less crime has been thoroughly discredited. There are only two ways concealed carry could be reducing crime: direct and indirect deterrence. As we’ve already noted, direct deterrence — a good guy with a gun stopping a bad guy — is extremely rare, with only 1,600 verified defensive gun uses occurring in 2014. And indirect deterrence — bad guys not committing a crime out of fear of encountering a good guy with a gun — is extremely unlikely, since research has shown that people are unaware of how many permit holders are actually in their home states. If neither direct nor indirect deterrence is happening at a significant level, then it is not possible to claim that gun ownership or concealed carry is reducing crime.

The argument: “Concealed carry holders are more law-abiding than the average citizen.”

The reality: To get a concealed carry license, gun owners must pass a background check. This means that concealed carry holders are, by definition, more law-abiding than the “average citizen,” since the “average citizen” includes violent criminals who can’t pass background checks. Further, the demographic characteristics of permit holders are quite differentthan the population at large. The significant majority of permit holders are white, middle-aged men who tend to live in areas with low rates of crime. The real question then is not whether permit holders are more law-abiding than the average person, but rather whether they are more law-abiding relative to other white, middle-aged men without a criminal history. There is no data that currently answers this, and gun advocates are trying to bury what little data does exist on concealed carry license holders.

talking points
First Share
Previous Post Why Campus Carry is a Bad Idea: Or Why Alcohol, Hormones, and Guns Don't Mix
Next PostWhy I Want Crooks to Know That My House Is a Gun-Free Zone

Why Campus Carry is a Bad Idea: Or Why Alcohol, Hormones, and Guns Don't Mix
1 Comment
Why I Want Crooks to Know That My House Is a Gun-Free Zone